A song with a powerful sound and voice, which has a moderate tempo but a full load of energy: The US-Americans BLACK MAP establish a solid presence in the rock radio landscape with “Left For Dead”! Ben Flanagan (The Torch Fire), Mark Engles (dredg) and Chris Robyn (Far) sound equally captivatingly explosive and meditative – a combination that has it all. They widen sonic horizons with boundless urgency and fearless determination. 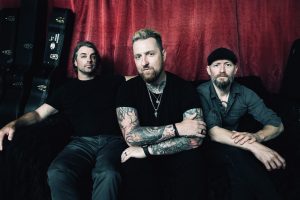 The song is from their upcoming third album “Melodoria” (release date: 18.02.22). The 10-track long player was produced in collaboration with Zach Ohren (Machine Head, The Ghost Inside, Set Your Goals), mixed by Beau Burchell (Saosin, Senses Fail, The Bronx) and recorded in various studios in the local Bay Area.

What can we expect? Old-school honesty, introspection and sincerity that can no longer be taken for granted in the current rock landscape. With their combination of post-hardcore, thick groove and ambient meditations, BLACK MAP invite all those who seek connection through music or simply want to escape from everyday life for a while. BLACK MAP have already toured with bands like Chevelle, Bush, Pop Evil, Circa Survive and Highly Suspect, their fan base is growing steadily.

Related Projects
We use cookies to ensure that we give you the best experience on our website. If you continue to use this site we will assume that you are happy with it.Ok