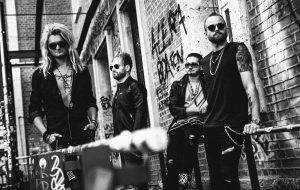 There’s no denial that KISSIN’ DYNAMITE always have something new to offer, even after 20 years of band existence: Today, the glam rockers release their new album “Not The End Of The Road”! With their seventh studio album, they want to continue the success story they had with the previous album “Ecstasy” (7th place in the German album charts) – and the chances are quite good, because the album titled track (released August 11th, 2022) even reached number 3 in the German rock charts!

Frontman Hannes Braun about the new album: “With Ecstasy, we didn’t make any more compromises and just wanted to compose music that is 100% us. Not The End Of The Road takes up seamlessly here.”

On “Not The End Of The Road“, KISSIN’ DYNAMITE not only show hard sounds, but also appear with a soft side on songs like “Good Life” (current radio single) and “Gone For Good”. Songs like “Voodoo Spell” underline the band’s versatility and diverse influences. An opus that can easily compete with the biggest stadium giants.

The album release also includes the static video for “No One Dies A Virgin”. Hannes Braun says about this: “Kurt Cobain once said: “Nobody Dies A Virgin – Life fucks us all”. Because at least once in life, we ​​have to face the bitter truth and then we fall. Deep. As deep as possible. That’s why you should never think that you are something better! Destiny has its own plans for you.:

TRACKLIST “NOT THE END OF THE ROAD”

Related Projects
We use cookies to ensure that we give you the best experience on our website. If you continue to use this site we will assume that you are happy with it.Ok